The arrival of Tibbs

Me and my boyfriend have lived together for 9 months now and we have felt that something was missing from the house. We are both animal lovers and we had talked about getting a pet.
So a couple of weeks ago we went down to the Leicester Animal Aid and had a look at the animals they had. I could have taken each and every animal home with me but I don't think our little house could take that.
We weren't sure whether to go for a dog or a cat but after talking to someone who worked there, we realised that our work commitments would be unsuitable for a dog. Even though we both work from home a fair amount a dog required more time socially then we could give it.
So a cat it was and after much deliberation we choose Ottis.
We changed his name to Tibbs as our neighbour has a dog named Ottis and didn't want to seem like we were copying them. Also if we ever had to call Ottis outside in the street we didn't want to accidentally call over a dog and possibly a cat as well. 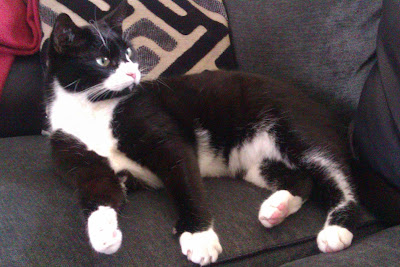 We have only had him a week and he has already face planted into the closed french doors whilst trying to stalk a pigeon. However despite that he seems happy here and we are happy to have him.
If you are looking to get a pet I'd highly recommend rescuing an animal. The staff at the Leicester Animal Aid were fantastic they let us take our time looking at the animals and interact with the cats so you got a feel for them.
Unfortunately there were dogs there as young as 4 months old, whose owners had just given them up because they couldn't handle them anymore. Luckily for the dogs and cats they are now in a place were they get walked every day, feed, groomed and played with but nothing is better then a permanent loving home.
Getting any animal shouldn't be dived into without thinking about your commitments and the animals needs but if you have enough time and space to give an animal a home why not give one a second chance...  http://www.leicesteranimalaid.org.uk/﻿
Posted by Geeky Cat at 22:04 No comments: